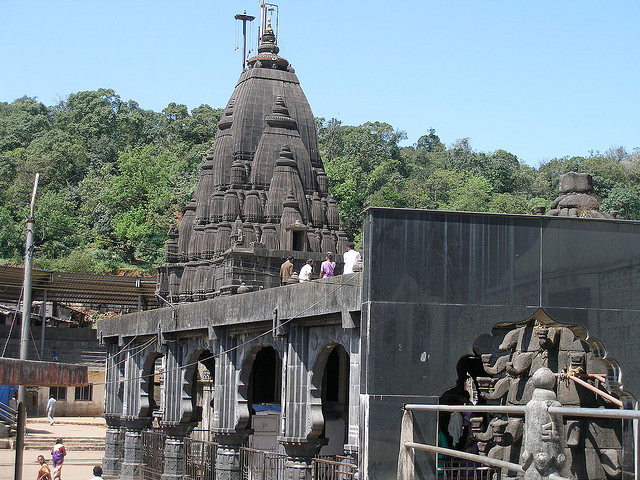 Bhimashankar Temple or Moteshwar Mahadev one of the 12 Jyotirlinga is an ancient temple located in Sahyadri hills in the state of Maharastra , located about 50 km in the village of Bhorgiri from Khed near Pune. Located amidst dense forests of Sahyadari hills its also a Wild Life Sanctuary and great scenic place for nature lovers, trekkers, jungle lovers and bird watchers. River Bhima also originates from here at Bhimashankar which is known as Chandraprabha in Padhapur . Mahrastra state have two more Jyotirlinga apart from this they are Trimbakeshwara near Nashik and Grishneshwar near Ellora around Aurangabad. It is a famous pilgrimage spot of India where devotees from all over India and world come here , apart from the pilgrimage this place is regarded as a trekker’s delight and a traveler’s sojourn due to its endless stretch of virgin forests and lofty peaks accompained by cool and calm Bhima river .

Though Devotees gather at this pious place all over the year , best time to visit Bhimashankar is August and February

Legend says that there is a story behind how this Shiva Lingam was formed here . Once long way back in ancient times there was a demon named Tripurasura who prayed to Lord Shiva in the jungle of Bhimashankar in order to get gift of mortality from Lord. Lord Shiva after getting pleased to prayers offered to him by demon gave him his wishes but in turn said that it should be used in the welfare of the humanity and if he misused his powers he will be destroyed. After sometime with over confidence the demon Tripurasura started misusing people and harrasing people with his powers. On this Lord Shiva and Goddess Parvati transformed into new from known as “Ardha Narya Nateshwar” and killed the demon for his evil deeds . On request from all gods Lord Shiva Decided to make this place holy and tranformed into Bhimashankar Jyotirlingam. It is believed that Bhimarathi River was formed by the sweat of Lord Shiva’s body while fighting the devil.

Bhimashankar Temple depicts the great influence of Nagara Style of Architecture . Temple was built by the Nana Phadnis back in 13th Century . Indo Aryan style of architecture can also be seen in the temple archtecture and its design. Temple Gates are wooden which have beautiful carved design . In the front of the temple there is a Roman style bell also which was presented by Chimaji Appa brother of Bajirao Peshwa I. The main gopuram sikharam of the temple was built by Nana Phadnis . Maratha Ruler Great Shivaji is said to have organized the facility of carrying out worship services in the temple . Behind the temple there is way that leads to the river . There are many other temples near Bhimashankar Temple like Kamalaja Shrine Dedicated to Godesses Parvati and also shrine for Siva Ganams, Shaakini and Daakini who helped Lord Shiva in battle with against the evil.

How to Reach Bhimashankar Temple

Bhimashankar Temple is located about 127 Km from Pune and 200 km from Mumabi in Maharastra . There are two routes to Bhimashankar Jyotirlinga one is Bhimashankar is via Manchar and other is from Rajgurunagar via Wada .

By Road – Government MSRTC buses (non luxury) run from Pune to Bhimashankar every 30 minutes from 5:30 am till 4:00 pm . State govt buses have frequent services to the temple . There are many buses from Mumbai also, State Transport buses are available from Mumbai Central. The first bus from Mumbai central leaves around 6.00 am and the last bus is of 10.30 pm. Journey Form Mumbai to the temple takes about 6 hours by private car and if you are travelling via buses than it would take 7-8 hours .

By Air – Pune Airport is the nearest airport from the temple located about 95km from here.

By Train – The Nearest railway Station to Bhimashankar Temple is Pune Junction Located about 102 km from the temple . From Pune there are several private and govt buses that have services very often . Taxi will take about INR 800 -900 From Pune to the temple .