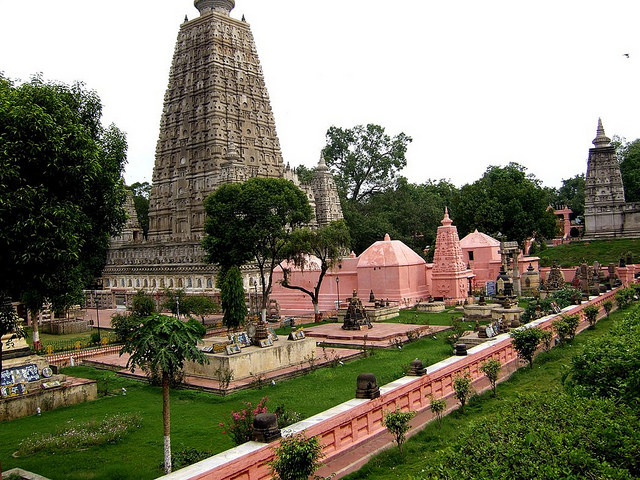 Bodh Gaya is a pious place located in Gaya District of Bihar , where Gautama Budhha have attained the spiritual enlightenment. It is religious Buddhist site of India , associated with the Mahabodhi Temple. Here Mahabodhi Temple is the main and prime attraction that was where Buddha was meditating . Bodhgaya is about 12 km from Gaya City.The NH83 Highway connects Gaya and Bodhgaya . It is one of the is the most important of the main four pilgrimage sites related to the life of Gautama Buddha, the other three being Kushinagar, Lumbini, and Sarnath.

It is believed that in 500 BC Prince Gautama Siddhartha, wandering as an ascetic, reached the sylvan banks of the Phalgu, near the city of Gaya. There he sat in meditation under a bodhi tree. After three days and three nights of meditation, Siddhartha claimed to have attained enlightenment. He then spent seven weeks at seven different spots in the vicinity meditating and considering his experience. After seven weeks, he travel led to Sarnath, where he began teaching Buddhism. It is believed that 250 years after the Enlightenment of the Buddha, Emperor Asoka visited Bodh Gaya. He is considered to be the founder of the original Mahabodhi temple.

With the decline of Buddhism in India, the temple was abandoned and forgotten, buried under layers of soil and sand. The temple was later restored by Sir Alexander Cunningham in the late 19th century.

Mahabodhi Temple – It is a Buddhist temple where Gautama Buddha, is said to have attained enlightenment . Its basement is 48 square feet and it rises in the form of a slender Pyramid till it reaches its neck, which is cylindrical in shape.Inside the temple, in the main sanctum, there is a colossal image of the Buddha in sitting posture touching the earth by his right hand. In 2002, Mahabodhi Temple, located in Bodh Gaya, became a UNESCO World Heritage Site.

Animesh Lochan Chaitya – It is believed that the Buddha spent one week here looking towards the great Bodhi tree out of gratitude, without twinkling his eyes.

Bodhi Tree – Bodhi Tree is the tree in Mhabodhi temple under which Gautama Buddha is said to have attained enlightenment .Bodhi tree at the Mahabodhi Temple is called the Sri Maha Bodhi.

Chankramana – It is the sacred spot of the Buddha’s meditative perambulations after Lord Buddha attained the spritual enlightment . It is believed that wherever the Buddha put his feet lotus sprang up.

Ratnagarh – The Buddha spent one week here, where it is believed that five colors came out of his body.

How To Reach Bodh Gaya

Bodh Gaya located in Gaya District of Bihar is very well connecetd with road network as it is a major tourist pigrimage destination of Bihar and India too .