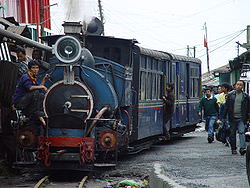 Trains came to India in the early part of the last century. Among the very first and the most novel is the famous Darjeeling Toy Train which made its maiden trip in September 1881. It is a pioneering work of achievement projecting not only its engineering ingenuity but it also marks the historic development of 19th century British Health Resort or convalescent center in the remote North Eastern Himalayas. The construction of the railway began under the name of “Darjeeling Tramway Co.”, which was renamed the “Darjeeling Himalayan Railway Co.” and has ever since retained this name officially.

The train passes through a variation of sheer panoramic beauty as soon as one begins the journey from Siliguri. First it’s the dense jungles, and then the tea plantations are seen clinging to the steep terraced mountains. Soon Sukna, the first station exhibits thick foliage of Sal, Toon and teak trees dotted with purple bougainvillea, scarlet poinsettia and exotic mauve of the orchids. The painstaking ascent of the train starts here. At Chunamandi it comes to its Z crossing and starts the zig-zagging or reversing to attain higher elevation. Tindharia, which has the railway repair workshop is the next station followed by Gayabari, where the train runs on the precipice edge.

In a distance is the Pagla Jhora the madly rumbling cascade of waters.Then quickly passing the Gladstone Rock – Kurseong, the town of “White Orchids” jumps into view, then comes to Bungalow Bazaar. Soon it reaches Ghoom, the world’s highest railroad station.

From here, the train starts descending gradually, crossing the evergreen pine forests to reach the graceful double loop at Batasia where a grand view of Darjeeling town presided over by the Mt. Kanchenjunga bursts before our eyes.

The study of the history of DHR reveals that the train started its voyage on July 1881. Before the establishment of DHR it took 3 days to cover the distance of 600 kilometers between Calcutta and Darjeeling. The British found Darjeeling attractive as a summer respite to avoid the heat and dust of the plain. Hence the importance of Darjeeling increased. Along with this the tea grown in the hills also became famous. Although Siliguri was connected to Calcutta by train, the transport between Darjeeling and Siliguri had to be in horse drawn carts thus giving the main connecting road its famous name – the Hill Cart Road. To improve transportation, the British Government set up the engineering marvel that took of towards the end of nineteenth century.

The Track and the Train

The reason behind the making of the track so narrow is that it helps the train to go through safely in the sharp turns of the hills. There were 50 engines in working condition when Darjeeling Himalayan Railway was at the zenith. The Sharp Stewart of Glasgow designed all the locomotives. It requires four men to operate the engine, two inside the engine and two pour sand on the track in order to increase the grip of the wheels over the track. UNESCO has declared the toy train as a World Heritage Site. Darjeeling Himalayan Railway, popularly known as the ‘Toy Train’ is one of the main attractions of the region. The track on which the train runs is only 600 millimeters wide. The size of the train is commensurate giving it the name `Toy Train.

The 88 kilometers journey through the ups and downs in the hills has always attracted the tourists. The total journey comprises of 16 kilometers in the plains. It takes 6 hour to reach Darjeeling by the toy train from its present starting point Siliguri Junction.

The stations, which will appear to you during the trip, are Sukna, Rangtong, Chunabhati, Tindharia, Gayabari, Mahanadi, Kurseong, Tung, Sonada, Ghoom and Darjeeling.