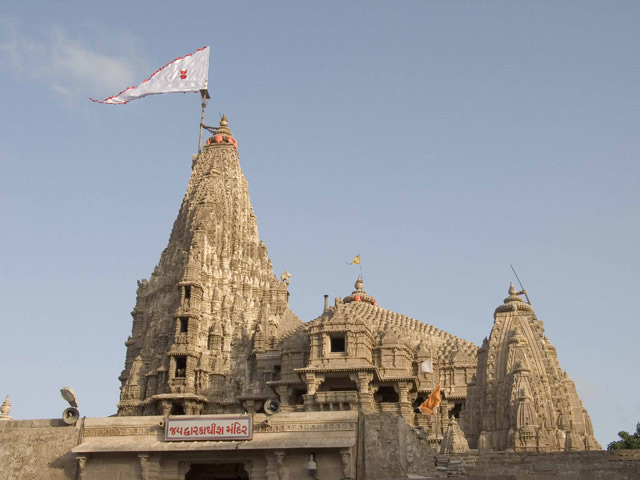 Dwarkadhish Temple or Dwarakadheesh temple is one of the holiest site of Chardham Yatra located in Dwarka City of Jamnagar District of Gujrat India. Dwarka City was the city where Lord Krishna an incarnation of Lord Vishnu Kingdom resided . Dwarka Mandir or temple is also known as Jagat Mandir and is believed to be 2,500 years old. Dwarakadheesh is the 108th Divya Desam of Lord Vishnu.

Dwarka has a long way back history of ancient periods during the time of Pandavas as in legends. Situated at the bank of Gomati river it was the capital city of Lord Krishna. The ancient city of Dwaraka is submerged in the sea and the remains of the city have been found in underwater excavation by archeologists.

Dwarkadhish Temple is one of the Chardham Site with other sites comprising of Badrinath , Jagannath Puri and Rameshwaram Temple. Dwarkadhish Temple is a 5-storied building, supported by 72 pillars, is known as Jagat Mandir or Nija Mandir, and is believed to be 2,500 years old. Vajranabhji the grandson of Lord Krishna built the temple in 400 BC . But the present temple was built in 16th century and depicts typical Chalukyan style of architecture. There are 60 exquisitely carved pillars. Temple entrance is from north which is also known as Moksha Dwaar and south entrance is known as Sawarga Dwaar. The deity of Lord Dwarkadhish is made of shiny black stone and is about 2.25 ft in height and the four hands of the deity carry a conch, the Sudarshana Chakra, a mace and a lotus.

How to Reach Dwarkadhish Temple

By Air – Jamnagar Airport is the nearest airport to Dwarka about 121 km from here and Rajkot Airport about 225 km . Kingfisher, Spicejet, Goair and Jet Airways operate regular flights to these places from various major cities of India.

By Train– Ahemdabad the capital city of Gujarat is about 450 km from here and is well connected with railway network and by road. Dwarka Railway Station is located about 2 km from here.