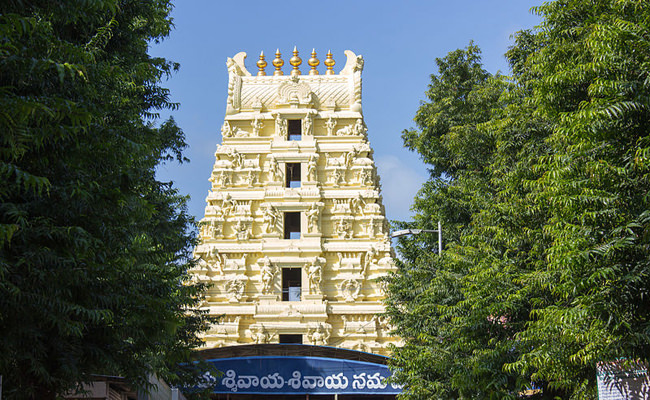 The temple can be accesed by anyone without the discrimination of sex caste and creed . The Mallikarjuna Linga is accessible to each and every devotee and anybody can go into the sanctum sanctorum of Mallikarjuna, touch him and perform Abhishekam and Archana himself .

Legends Say that when lord Shiva and Goddess Parvati decided to find suitable brides fro their two son but question was that who will marry first. On this lord Shiva told that one who goes round the world in Pradakshinam could get married first. Lord Ganesha went round his parents 7 times and was married first to Siddhi & Buddhi, the daughtersof Viswaroopan , while Lord Kartikeya went in vahana to take round of the world . Lord Kartikeya on this went to live in the mount Kravunja alone . On seeing Lord Shiva coming to meet him he tried to move to another place but on the request of the Devas, stayed close by . The place where Lord Siva and Parvathi stayed came to be known as Sri Sailam.

Mahashivratri is the main festival celebrated at Srisailam Mallikarjuna Swamy temple . On the wall of temple there are scripture of heroic legends from the Mahabharata and Ramayana and Srisailam is reffered to as Sri Parvata means the blessed hill. Origin of this temple is not yet clear as how and when this temple was formed. The temple is situated facing East. The centre mandapam has several pillars, with a huge idol of Nadikeswarar.

Places to See Near Mallikarjuna Swamy

How to reach Mallikarjuna Swamy