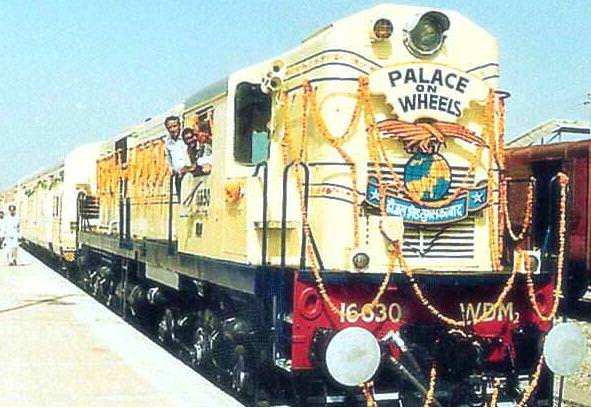 Palace on Wheels is a royal experience, a journey that is much more than a luxury train ride. Palace on Wheel tour epitomizes the rich Indian heritage and journeys through one of the most exotic regions in the world – Dazzling Delhi, Royal Rajasthan and Amazing Agra. Where else can you relax in comfort and witness exotic India passing by.

History of Palace on Wheels

In the past 20 years of operations, the Palace-on-Wheels has been rated as one of the best ten luxurious rail journeys in the world. Sit in these beautiful carriages and look around. You will find that each saloon highlights the cultural ethos of the state, represented through the use of furniture, handicrafts, painting and furnishings. The ceiling in the lounge is of particular interest. Each saloon is different but the overall ambience of the décor of the saloons has been taken care of to provide continuity and harmony.

Each saloon has cream yellow colour on its exterior walls and bears the Coat of Arms (logo) of the erstwhile princely states.

The Royal Background of the Palace on Wheels

On rolling back wheels of time, we find the rulers of princely states of Rajputana, Gujarat, the Nizam of Hyderabad and the Viceroy of British India travelled by these luxurious coaches. After independence, these coaches were parked and remained in this state for a quarter of a century until in 1981-82, when the Rajasthan Tourism Development Corporation and Indian Railways launched a special heritage tourist train for providing a unique memorable experience to the tourists visiting Rajasthan.

Royal Services on Board The newly introduced spa saloon,offers aryuvedic massage to refresh yourself for next day tour. Other services include laundry services and Doctor on request. Souvenirs and gift items bearing the insignia of Palace On Wheels and a coffee table book on the history the train are also available.

The names of the saloons given are based on the princely states of Rajasthan- Jaipur, Jodhpur, Alwar, Bundi, Kota, Jhalawar, Dungarpur, Dholpur, Bharatpur, Jaisalmer, Sirohi, Bikaner, Udaipur and Kishangarh.